February 12, 2010
By The Killers. Again, my iTunes is choosing a song that is actually quite fitting. The nails I am posting are fairly bright.. Haha.. Sorry, had to! I loved The Killers album Hot Fuss, but have been less than thrilled about their last two.. Which is upsetting, but I still have Hot Fuss to go off of, and there isn't one song that I skip through when I listen to the whole album - that is always a good sign!!

I am actually going to show all of you something else that I do when I am going to do my nails but not at my computer desk.. I saw the original image for this on another site and totally forgot to save it.. I just grabbed an index card and drew it out and then closed the window (silly Dee) - so if any of you happen to come across it, let me know! Or if I find it again, I will post it up.. It is way better than mine.. I had a serious case of shakey hands going on and could not make a straight line to save my life!! Oh, and I added another 'tutorial'.. I really need to figure out a better lighting situation.. Anyways! Photo time: 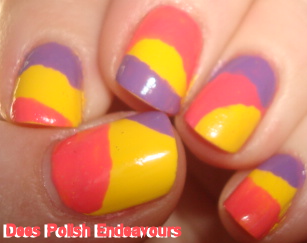 I seriously had random people grabbing at my hands all week.. Which isn't as strange as it sounds!

Also something strange.. I pretty much have another post to do right away.. I actually have things prepared early! I will either do it tonight or tomorrow as it isn't a V-Day look because I'll have to post that up either tomorrow or Sunday - phew!

I also received a challenge that I am super pumped about.. I will include my first 'draft' of that idea in the next post because I liked it but am not overjoyed about it.. Plus I used a fake nail because I had just done this look.. I want to do it on my own nails and all that jazz.

Whelp, I hope everyone is having a freakin' fabulous Friday!!