April 15, 2010
By Junior Boys.. I have seriously listened to this song 28 times within the last week, I cannot get enough of it! I bought it off of iTunes quite awhile back, but never really listened to it. Then, about a week ago, I finally gave it a fair listen to and absolutely love it!! I don't even know what it is about the tune.. Usually though, once he says 'hazel', I restart the song.. And it isn't said until the end.. Weird how the title actually is the most disappointed part of the song.. heh.

Ok, so, before I show you the mani I am currently sporting, I must say this.. This actually looks approximately 8 million times better in real life. The photos showcase my mistakes more than my own eyes do.. I mean, yes, I notice the lines that my silly black silkline polish left.. But some of the other mistakes that I notice in the photo are harder to notice with the human eye. I just had to get that off my chest.. Now.. Onwards! 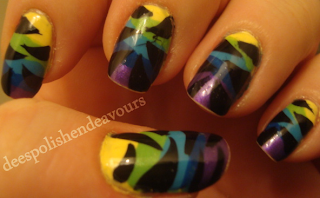 A couple of things.. First, Kae should really be getting the $$ I paid for Mesmerize.. After she posted her look done with the polish, it is pretty much the only polish I could think of. It was on my next to order list from TD.. BUT! I was London Drugs last Friday, and it was totally in a polish bin.. I did a walk by.. Double take.. Said 'no way..' checked the label, and way! The polish I had badly wanted. What a super day!! Second, I had inspiration for this bad boy in the form of a pair of heels. Now, I changed it from zebra (I'm sorry, you're still my favourite!) to more Tigery stripes.. Just for a simplicity sake. 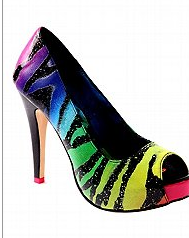 Now to add some gem like photos of my two mini rascals.. We had them upstairs with us (playing on the kitchen floor.. don't worry, cleaned and disinfected afterward!) 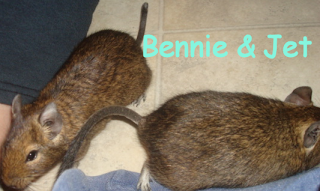 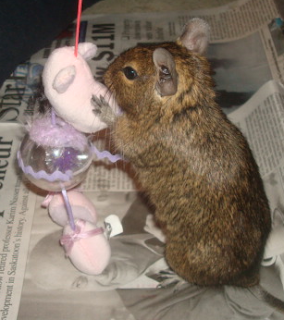 Please excuse my mother's leg and my sister's leg.. And the bottom photo is of Jet being ever so adorable. Alrighty, that is all for now!

Have a terrific Thursday everyone!!

april brooks said…
So much in this post! Wow! I love the Junior Boys too. In fact I brought them to play a show in Tulsa a few years ago! A couple of my friends and I figured out that no one was playing here simply because no one was asking! We had some success and lots of stress and fun. Hopefully we'll be able to start promoting shows again next year when my friend is done with grad school!
I LOVE your nails! So freaking cool! Fun to see the inspiration as well.
April 15, 2010 at 9:48 AM