June 29, 2010
Hmm.. No, I swear I am not some sort of sick weirdo.. The title is a play on two things.. One will be explained in this post.. The other I want to see if anyone can figure it out.. Leave me a comment if you think you know what the other 'thing' with the title is!!

So, as I said yesteryear, I was extremely excited that my idea has been used for PHD's Challenge, naturally I had to get my entry done!

Looking back, there are a few things I would have done differently, but in a way I am glad I went with the method I did.. TBH when you're looking at these bad boys in real life, they look pretty awesome.. I tried to capture that awesomeness in photos, but sometimes it just gets lost in translation! 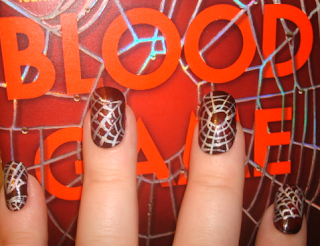 Oh hello 'Blood Game' reference numbero uno! The book cover I chose is Iris Johansen's Blood Game. The whole time I was reading this book (small book, but it was horrible, took me forever to finish!) I kept thinking about how the spider web looked like CG OMG and how fun it would be to recreate this on my nails. And it was a lot of fun! 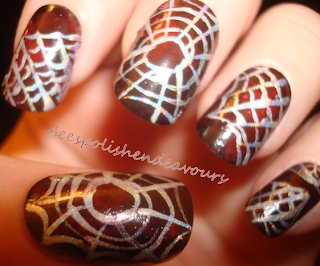 You can sort of see more of the background colour work in this photo. At first I had painted my nails and kept going around in a darker colour to match the book cover.. But I didn't like it! So I grabbed my trusty sponge and used CG Liquid Leather. It actually looked pretty good because I find LL isn't opaque until the second coat (at least!) so all the colouring underneath was still visible. Then, in the center, it is supposed to be more red.. That being said, I grabbed Essie Lollipop and put a dab of it on the middle of each nail, then lightly sponged it around. Like I said, it is somewhat noticeable on here, but irl, it looks rad!

Shortnails had asked me a question about how I wear my fake nails when I paint them up for a contest/challenge.. And I will show you what I do! Like you said, gluing them on would be pretty detrimental for my sweet lil nails.. So I turn to Craft Tack, or as I fondly call it, 'sticky tack'. I place bits on each of my nails, then just press the fake nails on to it. 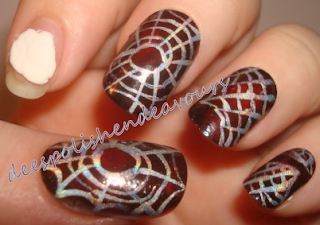 Then, when I am all done taking photos, they are easy to take off.. And if any remnants of the sticky tack is left on the nail, you can just roll another piece over and everything is cleaned off. Much safer than gluing the nails on for some photos. Fake nails aren't really my thing.. But sometimes for a contest/challenge, I find working with them much better.. That way if I am already sporting a mani or it just isn't something that I wouldn't want to wear out, I don't have to. Plus I don't have to paint and remove polish an extra time! Woo! 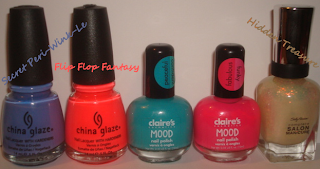 Last night I went to the 24 hour Shoppers Drug Mart as I needed to find jello (I am on this liquid diet prep deal.. it is terrible.. and I needed to get jello as it is the only other thing I can eat.. bleh) But of course I have to take a swing down the cosmetics area.. I was actually looking to get that new Maybelline Falsies mascara, but I convinced myself to put it down as I recently bought that Revlon mascara that Jessica Biel is hawking. Really I shouldn't play the mascara game anymore as I found one I love.. But I'm a sucker for false advertising! ANYWAYS! As I was strolling down the section I was like 'oh, a stand of Sally Henson Complete Salon Manicure polishes.. That is nice because they aren't bringing Hid-WHAT?!' There, 1 foot in front of me sparkled that flaky little bad boy! I seriously thought it was a mirage.. Then I reached out and touched it.. Almost sobbed. I literally had to tell myself to not do a tap dance right there. It was just so rewarding!

I will have to go paint my nails soon.. I cannot WAIT to test it out.. Finally!!

I hope everyone is having a terrific Tuesday! I am just idly waiting for tomorrow.. Yeah.. I'm a Twi-Hard (:

Meeka said…
I really like this mani! Great job free-handing the webs and I love the color gradation :) I also think the sticky tack is a great idea!
This is my first time coming across your blog (through PHD) and I had to comment because of this :P I've just started reading Blood Game recently, it was bought for me as a present, I'm having a hard time with it myself which says something because I usually devour books!
As for the other reference with your title, I don't know if it's what you were going for but since I read it I cannot get Lady Gaga's Love Game out of my head, except I'm replacing love with blood XD!
July 3, 2010 at 4:47 PM

shortwidenails said…
thanks for the tutorial!!! I'm going to get some craft tack/ sticky stuff now. I remember I used to use it for posters in my room when I was younger.

HT in canada? you got to be kidding me! I read somewhere on a canadian blogger site that it wasn't coming to canada. crazy!