I saw this on a Sophy Robson post and I have been wanting to try it out forEVER! I decided to finally give it a go yesterday. I don't necessarily hate it, but I don't really like what I did either. I was really tempted to take it all off and do something different.. But.. Whatever. I decided to give it a day or two on my nails. I have a bunch of cleaning to do tomorrow, so it can come off at that point in time. PLUS, when I was scoping out her website, I saw something extremely amazing that I want to do now.. And it is really simple.. So you will probably get three posts out of me this week - hooray!

I also apologize about the somber post from yesterday. I just really felt the need to type out that experience. I am just stressed from that and something else that is going on in my life. A HUGE change. Should be interesting (:

Anyways! On to the nailage! 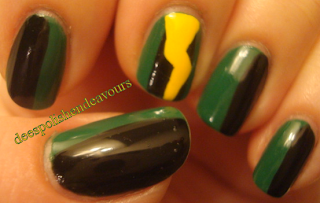 See that terribad lightning bolt.. It should be way thinner at the tip. Blergh! Ahh well!! 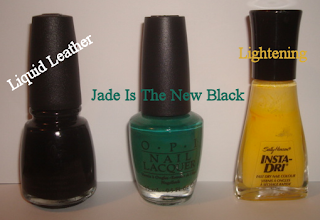 I used CG Liquid Leather, OPI Jade Is The New Black & SH Insta-Dri in Lightening.. That 'e' is really making me mad in their polish name.

Oh, and last night I did go out to the casino with the parents (yeah, I'm rad!).. Playing roulette with the dad.. It is pretty awesome. He puts up the money, and if we make a profit.. I get 25%.. I have played roulette 3 times now.. and have come out with $664.. Not that I am bragging, I just find it awesome because I am saving money like a beast because I have to take 6 weeks off from work starting mid-July.. And this is really, really, really going to help me out!! I know gambling isn't a great way to make money (believe me, it is a battle!) but it is nice when you take a chance and can walk out with some swagger!

OH! Also.. 100 followers! GUH?! I showed my brother last night that I had 99 followers, and he was pretty impressed. Now, my brother is like a youtube guru, so I told him that I had tried to make a video tutorial before for one of the manis I did, but of course the video didn't upload properly. He told me that if I ever want a video made up, he will happily help me out.. So expect a video tutorial soon! I think I am ready for that.. Even if it is just via photos for now (I will have to get a tripod for the camera or something before I can do a full out video!) I also think I will have to cap off a number so that I can collect goodies for a giveaway of sorts. Should be fun!!

Take care everyone.. I leave you with a photo of Bennie that I just took. He is finally starting to trust me again. Like I said, he has been acting weird.. Probably because he lost his mate/pal.. He was perched in my hand and his mitt made me laugh hysterically. Plus, he really wanted to steal my camera! 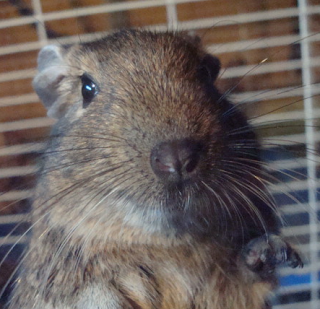 Tierney said…
Oh man, that rabbit story made me laugh!
My stepdad at the time decided we could keep 2 of the babies, the other 4 were given to a pet store.