I feel like I haven't posted in FOREVER! For that, I do apologize. Work has been kicking my ace lately.. And now that I have a few days off, I am totally slacking. Ugh.

Yesterday, my friend (and awesome co-worker) Amy stopped by. She had asked if I could do her nails for Halloween. I was pretty excited to be asked because I have only done one other persons nails.. aka my mom. Ok, and I have helped my sister.. Once.

ANYWAYS! I do believe her and some of her friends are dressing up as The Pussycat Dolls (awesome) and she wanted her nails to match this smokin' cheetah print bra she has. 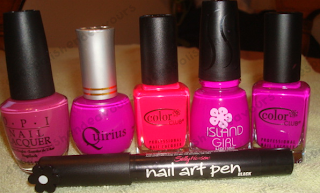 The nails photographed a bit brighter than they really are! And I left her a bit of a mess due to the sponging! We started off with OPI Dim Sum Plum, then we sponged some combo of Quirius Purple Passion, CC Warhol, Island Girl Hawaii Purple and CC Mrs. Robinson and this is what the outcome was.

She said she likes them and I do as well! It was fun to do someone elses' nails for once - plus, it doesn't hurt that she has GORGEOUS nails to begin with (:

I will probably back later with my final Halloween nail post.. Unless someone goes wrong tomorrow and they chip horribly.. And I will have to do ANOTHER Halloween themed mani.. Not that I would complain!

I will also answer past comments on the next entry - Take care til then!!

shortwidenails said…
I think I just noticed this..when did you start tagging your photos with you name? have you always been doing it and i've been blind?

I hate people with nice nails..argh!! well it's genetic ain't it? hows your nail damage doing? i totally chipped one my square nails so the corner is gone and it's weird shaped. boo
October 31, 2010 at 2:33 AM