Here are the nails that I have been sporting for Christmas.

I got the idea from WAH Nails. I am pretty sure the first way I saw them was with green, but they have a bunch of photos with the candy canes on a gold background. 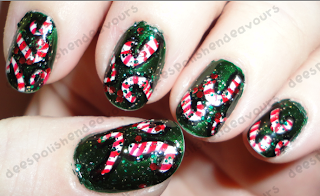 Now, I cannot hear you gasping, but in my mind I can hear it. Why? Well, because of the extreme whiteness of this photo. My dad gave us a bunch of cash for Christmas (he also bought us a blu-ray player AND an xbox, plus the kinect.. it has been an amazing holiday season for us!!) - so, with some of the $$ he gave to moi, I bought myself a new camera.

I haven't mastered the settings on it. Which could explain how white my hands are. BUT. I kid you not, that is seriously how pale I am. All. The. Time.

NOW! Besides that.. I like the photos I am seeing from this camera. The images are very sharp/crisp and I love that!

Downfall? I filmed a tutorial the other day on my roses mani.. And uploaded it.. Or so I thought. Then I deleted without checking the folder, because, well, my other camera ALWAYS put EVERYTHING into said file. The new kid needs to be trained. Needless to say, tutorial video is gone.

BUT! I will re-film. Maybe even tomorrow. We shall see!!

I hope everyone had a very Merry Christmas! I am kind of considering a nap. I worked this morning, came home, played kinect sports and now am tired. Heh.

Talk to you all again soon. I think I am going to change my nails this evening (: