My nails right now totally make me think of a B&B and what I hope they would either have as their comforter/bedspread or wallpaper. Strangely enough, I love it.

I feel this photo doesn't quite do it justice, but all of my other snapshots sucked, so this will have to do! 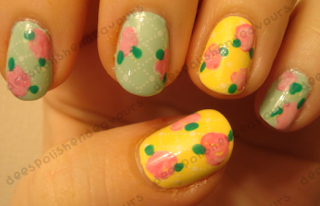 I also have to apologize for my cuticles. I have been doing a bunch of baking, cleaning and dishes lately. Despite slathering in cuticle oil and lotion every night, they still look like that! Grr! I figure the cold weather doesn't help things much either.

I know my roses are not the greatest, but for my first attempt, I am quite pleased.

I chuckled quite a bit over them this afternoon. There I was, clutching an xbox controller, playing UFC, career mode with my awesome figher, with super girly nails. Sigh. 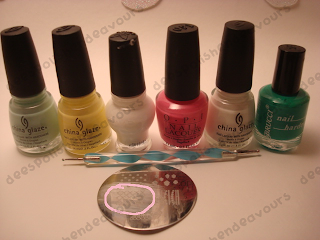 
Dotting tool sent to me from Born Pretty Store for review.

I really wanted to either do a full crackle nail mani OR use my new Essie Little Brown dress.. But for some reason I just had to do this.

I did want to use December as a month to just showcase Christmas themed manis, but I really couldn't be bothered. Which is strange. I think I will have Christmas-y nails on Christmas and that is all..

I hope everyone is having an terrific Thursday! See you soon (: shortwidenails said…
oo i like this design. what kind of brush did u use to do the design?