A Little Bit Of Everything

May 13, 2011
And by that I mean there is some haul action, some swatch action and even some manis I have sported within this past week.

I actually meant to post this up yesterday, but, we all know blogger was having some issues yesterday (whomp, whomp!)

I suppose I should just jump right in with some photos.

On my last post, I mentioned that I was heading out to a movie, (Side note: I saw 'Water For Elephants' and I loved it!), of course I had less than 30 mins until I was getting picked up. Usually I like to have a solid hour and then only take 30 mins to do my nails.. But beggars cannot be choosers (plus I had all day but I chose to clean all day instead.. aren't days off supposed to be about you? I digress..)

What I wanted to do was put on my base coat then apply CG Broken Hearted over top and have the pink crackle over my naked nails.. Did not work.. Looks terribad.. What to do!? Grab two other friends. 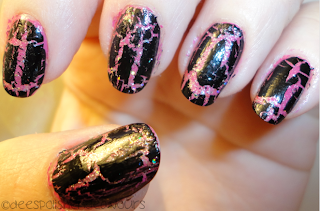 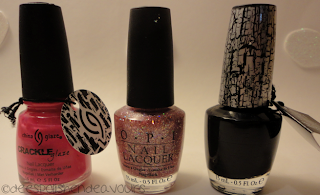 I grabbed OPIs: Teenage Dream & Black Shatter and went to work. Thankfully 1 coat of TD dries extremely fast! Then a quick coat of shatter, some top coat and I was out the door. I know, not the greatest, but whatever, it worked!

Then, the next day, a friend called and asked me if I wanted to go shopping with her downtown.. I was a bit reluctant, then I remembered that she likes to go to The Bay quite a bit.. And The Bay houses MAC. Sold. BUT! Before we went there, we were right in front of a Chatters.. I had been to a different Chatters supply store on the weekend, and they didn't have the POTC collection, so I almost didn't pop in.. But boy am I glad that I did..

Technically that lovely pink on the end (sparrow something or other..) should not be in this shot.. She is a foster child that I am only looking after until I can deliver her to her rightful owner. With that technicality out of the way, we have: OPIs Stranger Tides, Skull & Glossbones, Mermaid's Tears & Silver Shatter.

We all know I am not a swatchy person, but I decided that maybe I should start as sometimes I show you what I have bought and then I don't end up using them for months. You'll have to let my first few posts with swatch action have some leeway as this isn't really my bag. If the photos are terrifying, I apologize in advance! 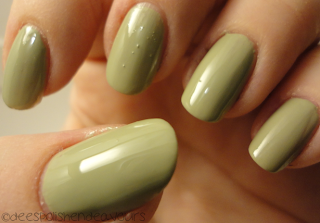 This is Stranger Tides and it is the shade I was most wanting. And. I love it! I love any type of green, so it isn't too shocking. I also have no idea what it with my index fingernail. It bubbles so often.. So annoying! Anyways, I would say it is a light mossy green and that it is gorgeous. 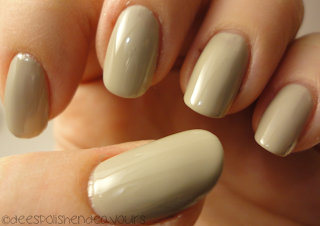 Skull & Glossbones.. I picked up and put back this shade 3 times. Finally, as I was stepping towards the register, I quickly swooped around, grabbed it and placed it with my other gems. I am extremely glad I did. It is extremely pale grey meets beige. I wouldn't call it greige or whatever the cool kids are calling it these days.. I also thought I would hate it with my skin tone, and it had quite the opposite effect. Thanks impulse buying! 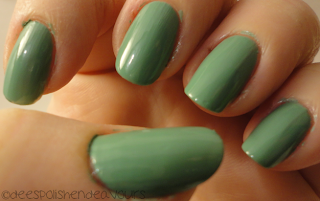 Mermaid's Tears.. I knew I wanted this shade no matter what. It is a muted jade.. And when I say muted, I mean really watered down. My photo makes it looks WAY more jade-esque than it really is. Either way, it is a really lovely colour.. And the name? Solid! Also, apparently I lost my vision when applying this colour.. 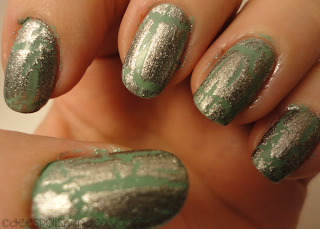 Ohhh hey there Silver Shatter over Mermaid's Tears. Not going to lie.. I love this combo. I also really like the silver shatter. A lot. Applies just like the others.. quick and painless! 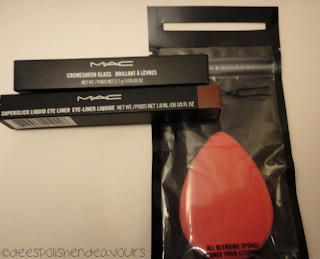 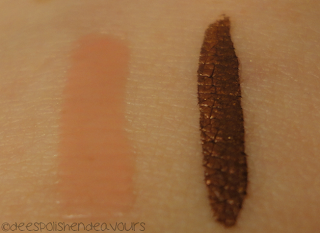 I also mentioned MAC, so I might as well post up my purchases. I kept picking up eyeshadows, but I picked up amazing palettes not too long ago.. Looked at blush, but I am just about done my NARS Super Orgasm and have Orgasm waiting to be used.. Pretty much everything I looked at, I have millions of. What I don't have millions of, however, are lip glosses and eyeliners - yay!

I bought a cremesheen lip glass in 'Just Superb', a superslick liquid eye liner in 'Defiantly Feline' and a makeup sponge. I was waiting for the Beauty Blender to get back in to stock online via sephora (of course it gets back in stock yesterday..)

I haven't officially gotten to use either item yet.. Work is not worth my MAC products.

Holy long post! I hope everyone had a super week and will have an amazing weekend!

Tierney said…
You picked the same Pirates polishes as me! I found them today at Trade Secret.. Except they didn't have silver shatter yet.. and I really want to get the rest of the collection, I just don't have the moneyyyy.

I can't decide what I think of Silver Shatter over Mermaid's Tears. I know a lot of people love that combo and it looks pretty cool but I'm not sure if it is something I would actually like on my own nails. Hmmm.
May 13, 2011 at 11:20 PM