August 01, 2011
And got totally destroyed by a mini-monster who has an affinity for shiny items.

Quite the intro, wouldn't you say so?

I know I would!

Now for some explanation.. It was 2am.. I had an appointment at the bank at 10am.. I needed to have SOMETHING on my nails.. And I needed some sleep in there somewhere. THEN I remembered my newly acquired bottle of CG Crackle Latticed Lilac. I also remembered testing it on the nail wheel over Zoya Kelly. PERFECT!

Not going to lie.. I love this combo.. So, before I could capture it in a photo AND do cleanup.. I visited with Bennie.. He is a degu and has shown up on here many times before.. Anyways.. Apparently degus like shiny things (or he does, at least).. My nails happened to be quite shimmery.. He tried to steal my nail.. It wasn't like the time he bit me out of anger, he didn't even do any damage to my nail.. Just the polish.. 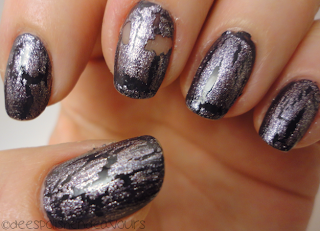 You can plainly see the damage that was done.. Rascal! Ohh well. It was only going to be a one day thing anyways as I had to do dishes the next day. Though I do think this will be the next combo for my toes - I love it!

Now, even though Bennie was a nail wrecker, I still allowed him some hangout time with Fonze. I, of course, nabbed a photo for all of you to enjoy.. That is about all for now.. OH! Except hello to my new followers (: 261?! WHAT?! AWESOME! I appreciate each and every one of you, always!

Hopefully I will have something rad on my nails mid-week to show. And I am hoping to film another tutorial soooon!

Have an awesome start to the week everyone - I know I am!!

OH! Also, I know I shouldn't ask.. BUT.. If you don't know anyone else entered in that Styled On contest (on facebook), or, you like my entry, please vote for me!! That would be great!! VOTE HERE

Audrey- The Nail Affair said…
That picture of your bunny and the degu is too cute for words! Never even heard of a degu before now lol:P Despite the damage done it looks really amazing, great combination of colours:)
August 2, 2011 at 5:44 PM