March 12, 2012
Yes.. My official countdown to the movie release date has begun.. And, as a way to aid in this countdown, I will use each one of the 12 polishes from the China Glaze 'Capitol Colours' collection.

Now, originally I said I would go in order of how often I felt I would use the polish.. That is now incorrect. SO. These are now going to be in no particular order.. Because.. After I use each one.. I love it more. It is so strange.. But I shouldn't have judged them before actually owning them.. That was my first mistake! 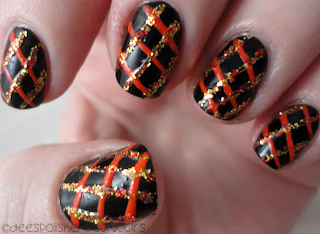 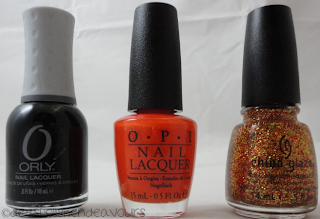 This almost feels Halloween-y to me.. Which is great, as I freaking love Halloween. That was a necessary statement to include.

I used Orly Liquid Vinyl as the base, then followed up with some lines of OPI A Roll In The Hague, and China Glaze Electrify. On a side note - this glitter is crazy dense. Yes, I did just say 'crazy dense'. You'd be able to almost fully cover your nail in 2 coats. For some reason I always find that amazing with glittery polish.