May 09, 2012
Gradient/ombre nails seem to be all the rage right now.. So of course I had to hop aboard that band wagon. I began my quest by following the tutorial HERE, but it just wasn't as rad as I thought.. So then I just used the classic sponge technique with just my green polish to the tips of the nails.

I know a lot of people will say this about looks they post up, myself included, but this photo does this absolutely no justice! This was blindingly bright irl and more gradient-y, but still looks kind of rad.

Also, because it didn't quite flow the way I had envisioned it to, I decided that slapping on a fun-time effect would be even better. It was. 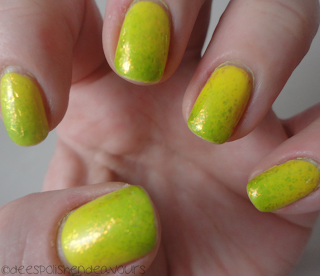 I used NYC Lexington Yellow, Illamasqua Radium, and Essie Luxeffects Shine Of The Times. You'll be able to see bottle shots of them gems (well, the NYC and ILLAMASQUAAAAAAA later on when I can post my birthday group post..)

Yeah. That's right! I am now the proud owner of an Illasmasqua nail polish.. And it nearly brings me to tears just thinking about it. I obviously need to have more now. Being obsessed with nail polish is never a pretty thing (ok, total lie, it is exceptionally pretty when the polish is worn, not so much when you're obsessing about the polish getting to your hands/fingertips)

I hope everyone is having a great Wednesday.. Back to studying for me. Bleh.