I stumbled across some amazing nails on tumblr, I do believe.. I hit my print screen button, as I usually do, so I can save the image later on (I have a program for all my screen shots to be saved for my perusal later on).. Yeah.. Silly Dee! This isn't YOUR computer. Le sigh.

Thankfully my brain had some sort of photographic memory moment and I was able recall the general idea behind the nails.. I apologize to the original poster, if I stumble across your photo again (which I should), I will give credit where credit is due! 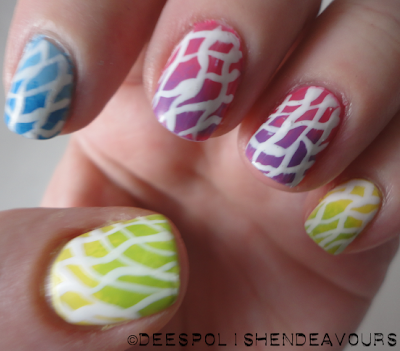 These are the nails.. And I received many compliments on them! I used Brucci polish for the green and yellow: the green doesn't have a label, but the yellow is Emmi & Olli Go Bananas, then it is OPI What's With The Cattitude, OPI Ogre The Top Blue (index finger), and OPI Elephantastic Pink, as well as OPI A Grape Fit (middle and ring), then the white is China Glaze White on White.

Now I just want to share two other photos with you all..

I am sure many of you are fans of True Blood - I am as well! We have a group of friends that come over on Sundays so we can all watch it together.. And of course there has to be snacks involved. I found these cupcakes sometime last year, and I think I have made them at least four times now (3 for the True Blood crew and once for a co-workers birthday).. BUT this time I decided to go with the recent fad of adding oreos into the cupcakes.. 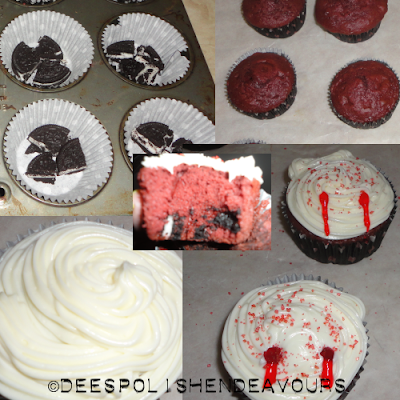 No word of a lie.. These were the best red velvet True Blood cupcakes I have made to date.. JUST SAYING! 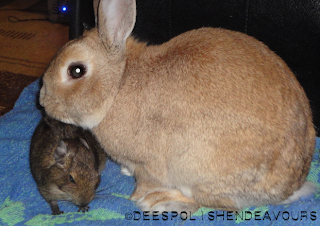 And I thought I would toss in some Ben and Fonze for you all to glance at. It was cage cleaning night the other evening.. I figured these two clowns would behave on the chair.. I was correct, of course, and they looked too cute - enjoy!

Kayleigh said…
So much cuteness! Love how colourful the mani is, the cupcakes look delicious (I love red velvet and WHOO True Blood!) and your pets are so cute!
July 11, 2012 at 1:57 AM