October 24, 2012
I did these last year based off of these nails from Sonoma Nail Art - which I am obsessed with. I seriously waited a whole year before I attempted them again. Now. Some things happened that I didn't like.. but.. I still like them better than my attempt last year. Bring on Halloween of '13 - I'll be ready!! 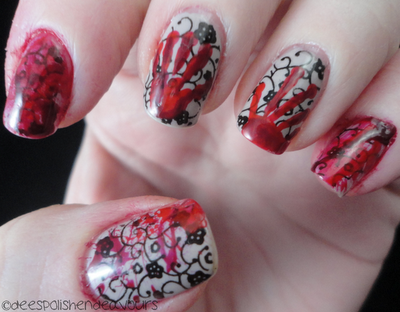 Ok. What happened. I used a straw for some splatter activity.. and.. it annihilated my index and pinky finger. It was most upsetting. BUT. Then I realized.. it is kind of neat. I mean.. blood wouldn't always make a neat splatter pattern.. sometimes it is in pools.. it works.

Oh, and those cuticle areas were never coming clean. Red polish is a gem, but it is a beast to me.