This Is Halloween: Zombies

I am really, really, REALLY excited to share my gross zombie nails with you for this day of the Challenge. I viewed the awesome nails (and subsequent tutorial) from The Daily Nail - I knew immediately that I had to try that out at some point in time.. and zombie nails seemed like the perfect time to do so. I didn't get mine as squishy as hers.. so there wasn't as much wrinkling.. THEN I had a great idea.. I would legitimately press on my nails at lift polish and peel it and make it look gross. Totally worked to what I wanted.. Here goes.. 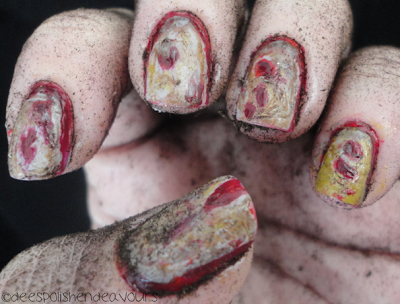 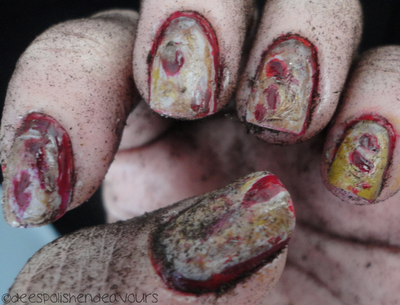 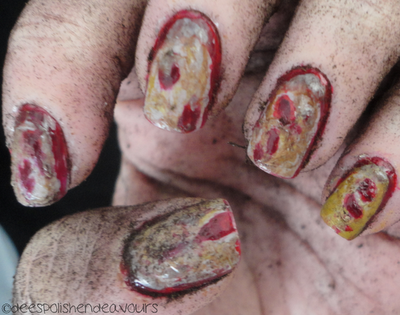 I had to wrestle around with some dirt before snapping photos.. I feel like it added to the zombie effect.. I mean.. if I'm a zombie, washing my mitts is not something that I really care about anymore.

I love these gross gems! Actually, my sister has requested that I do these for her nails on Halloween. The only thing I don't really like.. Is my pinky. I added too much of the puke-y green.. maybe that nail is just overly infected. Yes, we will go with that! 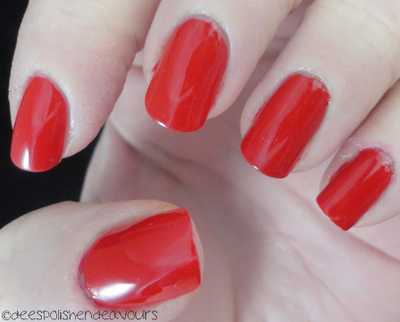 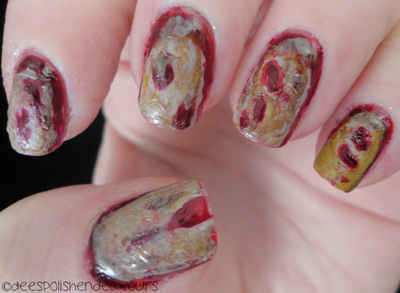 There is my new favourite red on its own.. it is perfection in my eyes! It is in the 2012 China Glaze Holiday Collection.. and then my zombie nails sans dirt and a bit of clean-up. I really do love these.. They just look so hideous and wonderful.

Remember to scope out some of these ladies and their awesome work on the challenge! See you later!!

Shannon said…
This is disgusting! Great job! :D and I think your super infected pinky looks awesome.
October 15, 2012 at 6:57 AM