Ohh, The Weather Outside Is Weather!

November 20, 2012
...If anyone knows where that quote is from, then you're awesome. And if you don't, well, you're still amazing.. But you should probably see the movie it is from..

Ok. I am maybe a hair early for "winter/holiday/Christmas" themed manis.. BUT.. I was sent an e-mail from Nail Polish Canada to participate in a Holiday Nail Art Challenge. Of course I agreed to it. For the first week, the theme is: Snow.

I knew I wanted to do snowflake nails.. but on what kind of base.. THEN I remembered the nails I wore to Breaking Dawn Part 2 on Friday - and knew they would be perfect. Of course all of you (except for my bff) have no idea what I'm talking about as they were ruined before I could photograph them. Yay for second chances!

On to the nails already, right?? 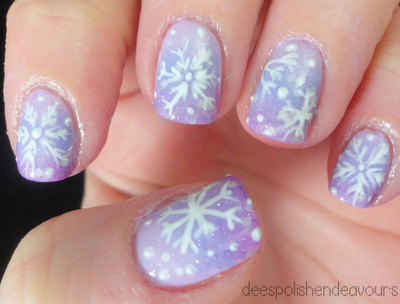 Beautiful, right? I do apologize for my shiny cuticle area. I have been slathering them so often lately - and even after a serious wash BEFORE the photos, they were still le shiny. FORGIVE ME!!

The base idea comes from HERE - and hers is flawless - just sayin'!

Then I watched THIS snowflake tutorial and went from there.

I used China Glaze Sweet Hook as my base, then I sponged on more Sweet Hook, along with China Glaze Secret Peri-Wink-Le and Spontaneous. Then there was a quick coat of OPI Pirouette My Whistle, and a very light dusting of OPI Don't Touch My Tutu! I made the snowflakes with a different method (for me - I usually just use polish) - I used acrylic paint. Strange. I am still undecided on how I feel about it. Slap on some top coat and this is what I was left with.

I think it looks quite lovely. I'd almost say exquisite - almost.

If any of you fab readers would like to get in on the action, you can still sign up HERE.

AND if you like what I have shown you.. maybe you could toss me a vote? Or at the very least, go scope out the other participants and toss someone a vote!

Another photo because I started playing with a snowflake font.. And I'm a slight nerd. 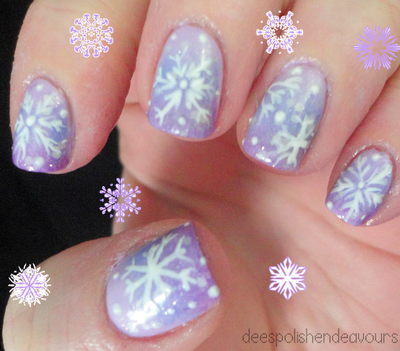 That is all for now - see you all again real soon!!

Minty said…
I also like your gradient better, this is beautiful! Ill be using this post for inspiration, sooo pretty.
November 20, 2012 at 9:04 PM

rebecca said…
oh oh ohhhhh this is beautiful!!!
and thank you for reminding me about the NPC contest! might have to do some winter nails tomorrow!
November 20, 2012 at 9:21 PM

@Minty - Thank you sososo much. I look forward to seeing your spin on it - like, really looking forward to it!!

Kalee said…
BAAAHAHAHA. He is the best part of that whole movie. My boyfriend and I say that all the time when referencing the weather. Anyways, this is awesome! I'm gonna have to try and recreate this. Awesome color choices.
November 21, 2012 at 1:38 AM

NailNarcotics said…
I'm so excited to see Christmas/holiday nails. I've been waiting for other people to start....now I can. SAAAWEEEET
November 21, 2012 at 7:47 AM

Kayleigh said…
Beautiful! I love the colour you used it's gorgeous! And no way are you early, I started my Christmas type manis right after Remembrance Day!
November 22, 2012 at 12:57 PM

Lindsay said…
The colors you used are beautiful. The purple is subtle but still very wintry.
November 25, 2012 at 3:11 PM