I am positive that I have mentioned at least 8 million times how blue nail polish is my favourite. I feel like it compliments my skin tone the best, or, at the very least, I feel very confident when I sport blue polish. Just on of those 'quirks', I suppose. Anyways.

When I came across THESE NAILS by Sensationails4u, I was like 'yup', but immediately slapped some polish on to my nails. I changed it up a smidge because I do not have nail vinyls (plus I probably would not use them correctly and ruin lives) so I free-handed the lines and was not pleased with the lack of crispness. 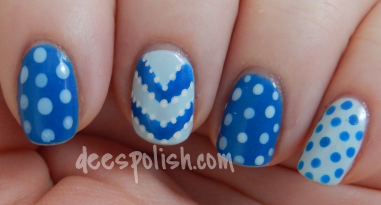 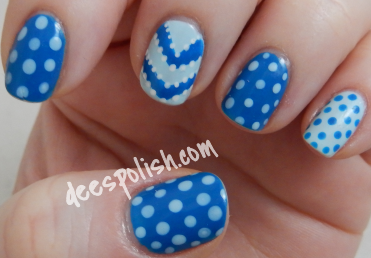 I want to go on a sort of mini-rant, but not a rant at the same time. One of the first.. oh.. 20 polishes I ever bought was the "original" formulation of OPI Gargantuan Green Grape, and I was OBSESSED with that gem.. then, it was down to less than a quarter of the bottle left.. it was all thick and goopy - even nail polish thinner could make it workable. THEN. I saw that GGG was available using my points on NPC, so I went for it, and was thrilled when the package arrived because I knew I would be replacing a favourite.. only.. it was not the same polish! It is.. like.. blue. Um. Duuumb! I mean, like my sister pointed out, it is still a nice polish colour, but it was not the colour I expected it to be. BUT. Then I can use it in manis like this, and it is rad. So. Rant in the fact that I no longer have that particular shade in my collection, and non-rant because it is not a total loss.

That is all for today! See you all again soon!!