So, I can practically hear people reading out the title of this post.. pseudo-indominus rex nails.. and you're probably like 'um.. what?!'

So, it is probably absolutely no surprise that I am obsessed with dinos.. which in turn makes me obsessed with the Jurassic Park flicks. This past summer marked the release of 'Jurassic World' (which was awesome, in case you have not already viewed it). Anyways, in that flick, real dinos hanging out at a dino-zoo is a legit thing, and people are apparently 'bored' by this (seriously people!) - so the park people decide to create a dinosaur of their own - clearly a genius idea! So, Dr. Wu strings together some DNA strands, and creates the Indominus Rex! Yaaah! There are strains from a few different species woven together.. and one of them is the cuttlefish, which gave this rad beast the ability of camouflage - which leads me how these nails tie in to that.

I was sent these awesome golden 3D nail art bad boys from LadyQueen. Find them HERE.

So then I slapped on some black polish, splattered on some gold, and attached the dinos. Slight camouflage, but in the right lighting, they are detectable! 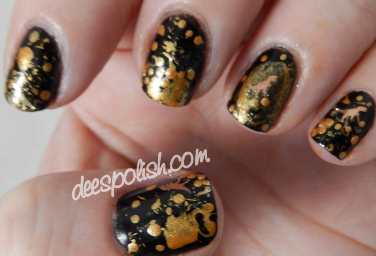 If you happen to be scoping out all the goodies on LadyQueen's site, and want to make a purchase, why don't you save yourself 15% by using the code: BSLC15

Enjoy - and have an excellent day!!